Czech cuisine is of the hearty sort. Kitchens here in Prague aren't normally stocked with delicate herbs and seasonings. Instead, Czechs use a lot of garden-variety ingredients to spice their dishes. 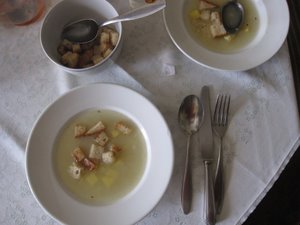 This page explores local cuisine and what makes it original to the Czech Republic.

These are the staples found in our Grandma's kitchen and spice cabinet. Nothing fancy, just home cooking, traditional food.

Meals often start at the butcher's shop (řeznictví). That's because meat is a vital component to most meals. Main meals nearly always include meat - especially lunch.

Czechs have a taste for sausages, pickled meats and the bits that many cultures dislike - how about smoked tongue, pig knees, kidneys and others.

Meat is prepared in a variety of ways - too many to list here really.

Let's just say, Czechs aren't afraid to fry, bake and pressure cook whatever necessary. And, sometimes we'll whip up a sauce to compliment a meat dish especially if we're having dumplings.

Fish isn't so common but you'll find cold salads with fish and carp and trout variations.

Obviously vegetarians are not so common in the Czech Republic. Although alternative eating styles are ever increasing. But, Grandma's generation will openly frown on this "behavior." 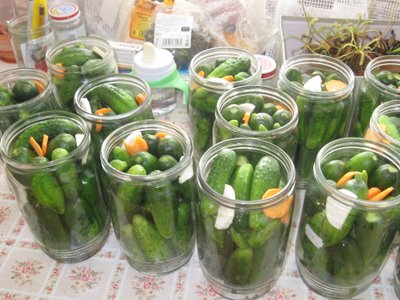 Try our Czech recipes for more examples of Czech cooking.

Shopping for food is generally done at a number of shops. So small fruit and vegetable shops are scattered everywhere throughout Prague and other cities.

Meals are fortified by a few key vegetables - mostly of the root variety. A green grocer will always have: potatoes, onions, carots, celery root, parsley and chives.

Potatoes are the king of vegetables in the Czech Republic. They are cooked in many ways and are commonly boiled to accompany a meat dish.

These things are also important for making soups which are essential to Czech cuisine. For many families (like our Grandma), a meal isn't complete without soup. Soup is even served during weekday lunches in many restaurants in Prague.

Herbs and Spices in Czech Cuisine

Our spice rack is relatively mild compared to many other cultures. There's not a lot of hot 'n spicy going on here. A lot of Czech food is heavily salted and some foreigners can be turned off by this. These herbs are often used in main meals:

For sweeter tastes our cabinet most often includes cinnamon, cloves and nutmeg. 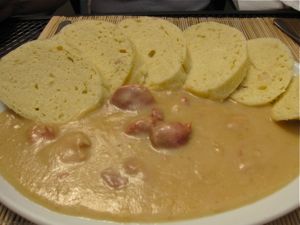 Czech cuisine is generally considered old European - meat and potatoes fare. Meat is cooked in a variety of ways and is complimented by small side dishes like root vegetables or dumplings. Soups are also an essential part of Czech food.

Return to My Prague Sights Homepage