Finding the cheapest flights to Prague might be the most important part of your travel. Prague is easy to fly to and has become a major European destination, but which airline and flight is best for you?

This page provides some basic information about flights to Prague including a few tips, from the different budget airlines to general things to keep in mind when flying to Prague.

The best part of flying to Prague might be the ease of Prague Airport. It's a relatively small airport with two arrival and departure terminals.

Delays at the airport are fairly rare and it's very close to the city center, only 15 km. So arriving and departing is very easy.

Of course, any arrival is helped if you book an airport transfer. 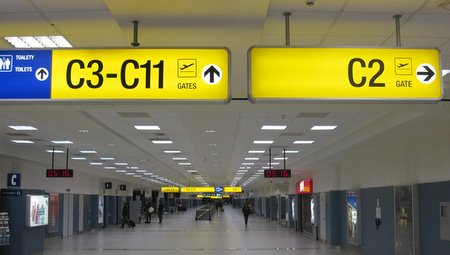 Prague's Vaclav Havel airport is small and simple to use.

There are plenty of no-frills, budget airlines serving Prague. These are based in Europe and can save you lots of money. The deals can be very surprising especially if you book early.

If you can't book early then it might pay off to book late if it's not peak season. Or, try to be flexible regarding your starting point and date.

Many cheap airlines use lesser known airports to keep costs down.

If you're flying to Prague from outside Europe, you might consider breaking your trip into two parts. Get to Europe first, then book a low-cost airline.

For more info, please see our article about cheap flights to Prague.

To get the best ticket prices, book as early as possible - the earlier the better for the cheap tickets. If you can, be flexible with your dates and try traveling during the week - it's usually cheaper.

Be aware that many low-cost airlines will change flight times and cancel flights altogether on a whim.

Fly to Prague from UK or Ireland

The United Kingdom probably has the most options for flying to Prague - and the cheapest. The low-cost carriers include: EasyJet, BmiBaby, Jet2.com, Ryanair, Sky Europe and WizzAir.

You can find flights from Dublin by Aer Lingus, Czech Airlines and the low-cost Ryanair.

Flights from other European Cities

Most European cities have routes to Prague. So, the list is too long for this page. But you are certain to find a bargain if you book early.

This goes for other European countries too, like Russia, Turkey, Greece, various island countries and northern Europe. Prague is a popular destination and more and more cities are adding it to their destinations.

Be sure to check ticket prices everyday since they can change periodically. And, always check directly with each airline for specials and offers that online suppliers can't provide.

Fly to Prague from Outside Europe

North America: Czech Airlines has nonstop flights to and from New York/JFK and Toronto. If you can't make these flights you can use their SkyTeam partners. KLM and Air France in particular have plenty of connections through the U.S.

KLM generally flies through Amsterdam then there's a Czech Airlines flight to Prague from there. Air France insists on going through Paris. Unfortunately, many travelers have had problems connecting their flight in Paris.

South America/ Australia / New Zealand: From my research, there are no direct flights to Prague from these destinations. All carriers seem to have at least one stop. So, it's best to catch a flight to Europe and then continue to Prague or grab a low-cost flight. Many of these will either go through London or Amsterdam.