Obecni dum is one of the most beautiful buildings in Prague. It's a must-see destination which borders Old Town, not far from the main square. 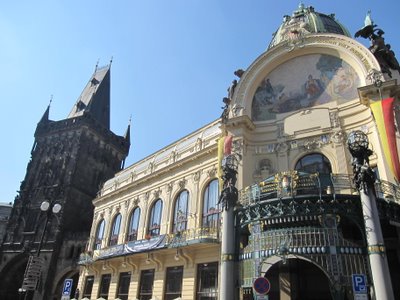 Even if you don't go inside, it's definitely worth the little time it takes to find the Municpal House. That's why we've added it to our top attractions.

Obecní Dům stands on the old site of what was once called King's Court. This was a former residence of King Wenceslas IV, who had new fortifications built in the area to protect Prague. One part of these fortifications can be found next to the Municipal House. This dark tower is called Powder Tower (Prašná Brána). It was a former storage place for gunpowder.

Today there is an incredible contrast between the Municipal House and the Powder Tower. Obecní Dům on the one hand is this magical place with beautiful detail while the tower is seemingly holding tight to the darker elements of history from the 14th century.

Either way, they are both worth visiting. Interestingly enough the two buildings were connected physically to add to the intrigue here. 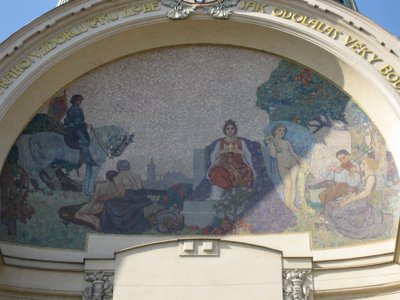 Detail of the building's front

The current form of the Municipal House took shape in the early 1900's. And, it was finally opened in 1912. The opening actually followed years of work and controversial city commissions. But thankfully its culmination was well worth it.

The design and art of the building you see today is a combination of many artists of the time. The design itself was a surprising cooperation of artistic elements including the work of many well known Czech artists such as Alfons Mucha and Mikulas Ales. Their details are on show here, from the little faces peering down at us to the splendid mosaic above the main entrance. 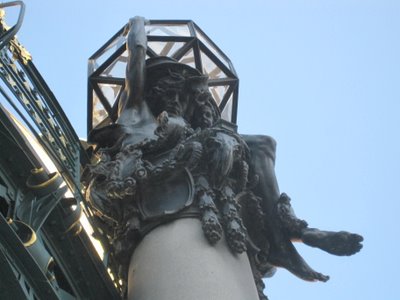 The building is covered in Art Nouveau decadence.

There's no getting around it - for a full idea of the Municipal House you really should take a tour inside. This is true especially if you have any interest in the arts or even Art Nouveau. There's artsy splendor and cool decadence inside for sure!<br> <br> The admission is a bit more than other attractions, but this is really the only way to see what's inside. The tour gives you access to all sorts of halls and rooms that the general public cannot access.

The tour costs 270 CZK with cheaper options for students, seniors and families. The tour takes about 1 hour and covers various concert halls, the confectionary, Mayor's Hall and other remarkable spots. You also get a token for a free drink in the American Bar with tour ticket.

If you have a Prague card, then your ticket will be only 243 CZK. Photography is prohibiited unless you buy a photo pass for 55 CZK.

Feel free to step inside without planning to do the tour. You can peek in a few places without paying that will give you an idea of what's inside. 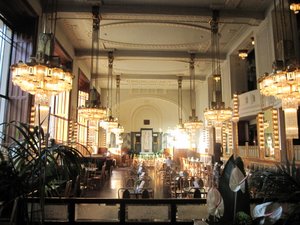 You might also try the spacious cafe (kavarna) on the ground floor with big picture windows or the interesting American Bar downstairs.

You might also consider seeing one of the many performed at Obecní Dům. They have a number of different concerts ongoing and you generally can find a seat on the spot. Tickets and more info are just inside the main entrance on the left.

Obecni Dum is located just down from Old Town Square via Celetna Street. Just follow the street from the edge of the square for about 2 minutes and you will come to the Powder Tower with the Municpal House on your left.

You can't really miss it.

You can also find Obecni dum by metro or tram. The metro station just outside is called Namestí Republiky - it's on the B line. The tram stop has the same name. Trams 5, 8, 14 and 26 stop here.