All About Prague Castle

Prague Castle deserves plenty of attention. It's the largest castle in the world and is the seat of the Czech government.

The castle has become a symbol of Czech Republic as a whole. And in our opinion, it's the most important tourist site or monument in Prague.

The castle is actually a complex of buildings. It's almost a small town on its own with a variety of walls, gardens and buildings. So, I recommend giving the castle plenty of time to experience it. Then, come back once more if you can. 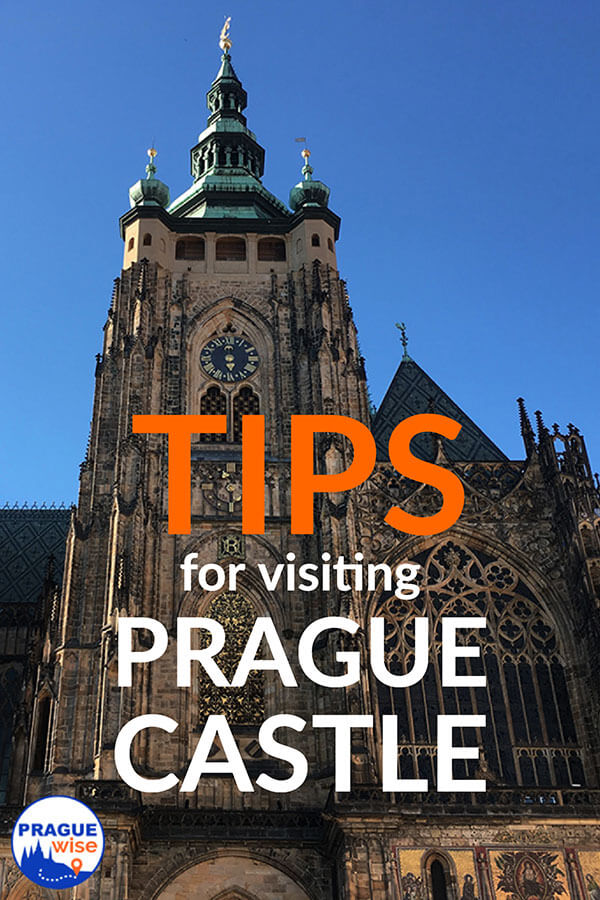 It's free to enter the castle grounds, gardens and much of the cathedral. But, tickets are required for individual buildings and areas.

There are 3 ticket options, each with its own combination of sights.

Some gallery exhibitions and the Powder Tower can be purchased individually.

Tip... Tickets are good for two days, so leave something for a second trip to the castle. Visit in the morning or late afternoon when crowds are less intense.

St. Vitus' Cathedral (or Prague Cathedral) is the most recognizable part of Prague Castle. Its size and imposing spires seem like an entire castle unto itself.

Founded in 1344 by Charles IV it now combines Gothic, Renaissance and Baroque architecture. Over centuries, changes have been made to the cathedral until its consecration in 1929. 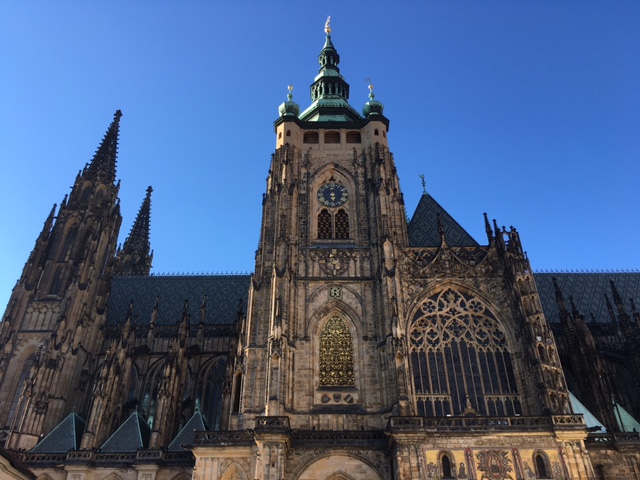 A side view of the St Vitus Cathedral

There is a small free area in the rear of the cathedral for those who wish to pray. But you should consider buying a ticket to get full access - it's well worth it.

At the northern end, you will find incredible effigies, statues, the Royal Mausoleum and the impressive silver tomb of St. John of Nepomuk. Be sure not to overlook the stairs leading down to the Royal Crypt. It houses remains of past Czech leaders such as Charles IV, Rudolf II and Wenceslas IV.

The cathedral also includes a number of side chapels. Be sure not to miss the Chapel of St. Wenceslas. Its detail is remarkable. But even more intriguing might be the nearby door with seven locks. Behind this door is a staircase to the Coronation Chamber and the Czech crown jewels. The jewels are only displayed publicly upon word of the president - which is very rare.

Tip... If you don't mind tight spaces, climb the narrow stairs up the cathedral's tower. You will pass the clockworks and enormous 16th century bells on your way to splendid views. The whole experience will be incredibly memorable.

Watch our video of the castle

Just next to St. Vitus Cathedral sits the Old Royal Palace. It dates from the 10th century and has been the home of numerous princes and kings. And, every president of the republic has been sworn in here. 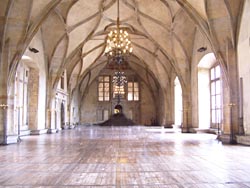 A particular highlight of the palace is Vladislav Hall (pictured). Its beautifully interlaced ceiling is absolutely remarkable.

The hall has been used for banquets, coronations and even jousting tournaments. Knights entered the hall from the aptly named Riders' Staircase.

The exhibition The Story of Prague Castle can be found on the ground floor of the palace. Admission is included in the long tour. It's a quick way to see the changes and developments of 1000 years of Prague Castle.

St. George's Basilica has Romanesque foundations dating to the 10th century. But most of what is seen today is from subsequent modifications in later years (19th and 20th centuries). 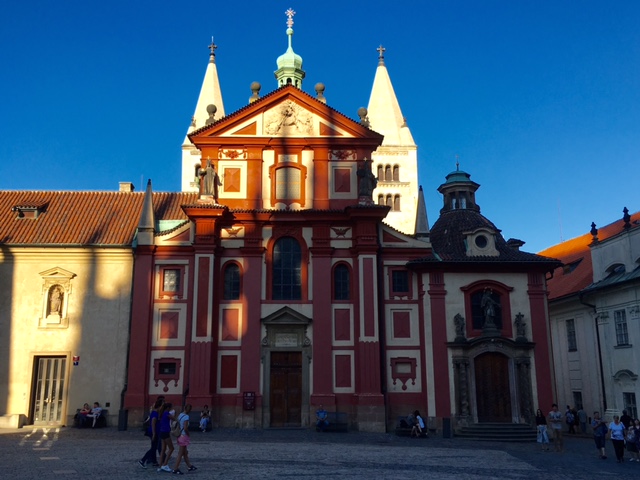 The basilica remains one of my favorites. It somehow maintains a simplicity that seems more personal and separates itself from other churches in Prague.

The basilica includes the tombs of Prince Boleslav II and Prince Vratislav I (founder) - both from the 10th century. Under the stairs you will find the crypt of the Premysl kings. And, be sure to find the bizarre sculpture of Vanity from the 16th century.

Adjacent to the basilica is the Convent of St. George. This was the first convent in Bohemia and dates from 973. The convent now houses the National Gallery and its impressive Gothic and baroque art collection. (Like most museums and galleries in Prague, it is closed on Mondays.)

The Golden Lane is a small romantic row of 16th century dwellings. They were originally built as homes for castle servants, marksmen and possibly goldsmiths - hence the name. The homes were occupied until World War II and Franz Kafka lived at No. 22 for a brief time. Today the lane is marked by little souvenir shops.

We wouldn't say the lane is essential sightseeing, but the buildings are certainly a unique feature to Prague. You can enter the lane with a ticket or it's free from 5 to 8 pm, when the shops are closed.


The Daliborka Tower was built in the 15th century as part of the castle's fortifications. The bottom floor was used as a prison and the tower is named after its first prisoner, Dalibor of Kozojedy. Today there is an exhibition of gruesome torture devices and a history of prison "services" from the Middle Ages to the 18th century. 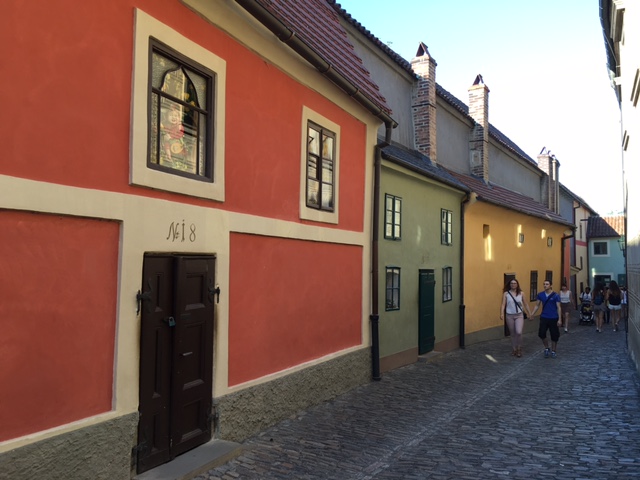 Tip... The Golden Lane at Prague Castle is narrow and can get quite crowded - so visit in the late afternoon when the crowds thin out a bit. After 5 pm it's free without a tour ticket!

The Powder Tower is another fortification tower built in the 15th century - similar to Daliborka Tower. It sits on the north end of the castle grounds and overlooks the Stag Moat. Admission is included in either tour ticket or you can buy a single admission ticket. 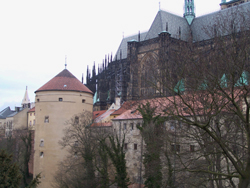 The tower was never battle tested and likely has a more interesting history based on its prior inhabitants. In the 16th century the bell maker Tomas Jaros lived and worked here. And his bell, Zikmund, still rings overhead in the cathedral's bell tower. Jaros also made the Singing Fountain which is still in use in the Royal Gardens.

During the rule of Rudolf II, the tower was inhabited by alchemists who were convinced they could turn lead into gold. Afterward it was used as a storage for gunpowder - hence the tower's name.

Tip... Have a look through the little windows for pleasant views of Prague and the Stag Moat. There's a very nice pathway through the Stag Moat that is hardly visited. Check it out if you have some extra time.

The Picture Gallery offers a significant European collection of nearly 4,000 paintings. The collection was first started by Rudolf II in the 16th century. His joy for art compelled him to acquire a variety of works.

The collection is now housed just off the second courtyard of the castle. The building is the former imperial stables where Rudolf II kept his Spanish horses and rotates a number of paintings from the permanent collection as well as temporary ones. The collection includes works from Lucas Cranach, Tintoretto, Titian and others.

Tip... Admission to the Picture Gallery is free every Monday from 4 pm to 6 pm.

There are at least six gardens that encircle the castle. And, thankfully they are all free. Some are carefully manicured and some are a bit wild and reclusive.

Most gardens have limited accessibility (April - October). But, when everything is open, you can walk a green ring almost all the way around the castle. 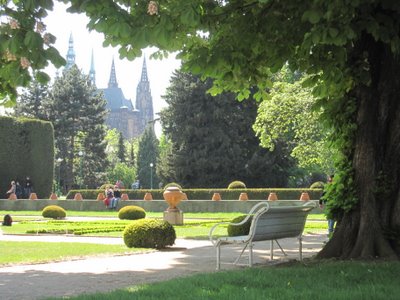 We particularly like the Stag Moat (Jeleni Prikop) on the northern side of the castle. Turn right just before the guarded northern entrance to the castle and follow the path down into the moat. Even in summer this relaxing pathway is nearly deserted.

The gardens also include a variety of walls and beautiful buildings. The Summer Palace, located at the eastern end, was built by Emperor Ferdinand I for his wife, Anne Jagiello. Many people consider it to be the "most beautiful building north of the Alps."

On the southern slopes of the castle you'll find a maze of grapevines and incredible views over Malá Strana. You'll need a little extra time to find some of the more interesting spots. But it's well worth it.

It's easy to spend a whole day touring the castle. But, it's do-able in half a day. It just depends on whether or not you choose a tour or individual sights. 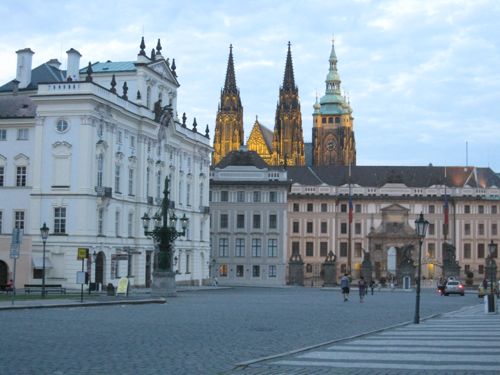 Have your say about what you just read! Leave us a comment in the box below.