Please visit Strahov Monastery when you're in Prague. It's a beautiful, historical attraction that often goes overlooked. If you don't go inside, at least visit for the spectacular view. 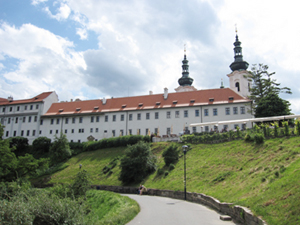 Perched above the city, Strahov Monastery offers a variety of things to see. I personally think it should not be missed. This page outlines the monastery in a bit more detail. I recommend combining a visit here with a stop at the nearby Loreto and Prague Castle.

The most popular part of the monastery is undoubtedly the Strahov Library. You can visit the library on its own (80 CZK) and then take in the monastery itself. The monastery includes a variety of beautiful halls, frescoes and a picture gallery.

You can visit just the halls for 30 CZK or both the halls and picture gallery for 60 CZK.

The library has two magnificent adjacent halls containing volumes and manuscripts. Each hall is lined with gilded wooden shelves and incredible frescoes. Unfortunately, visitors can only peek into the halls from the corridor. Humidity fluctuations apparently jeopordize the frescoes and books.

The two halls are connected by a corridor that houses the so-called Cabinet of Curiosities. Before modern museums there were... um, well, cabinets. This collection is certainly curious and stores what the monastery calls "mysterious and remarkable" findings of the times. You might throw in "bizarre" as well.

This cabinet was bought for Strahov in 1798 and today you'll see a range of things inside from insects to remains of a Dodo bird to a few weapons and a myriad of other stuffed animals and more. 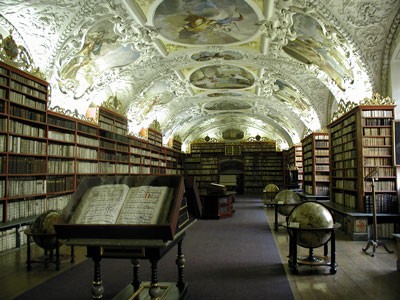 The Theological Hall is the oldest part of the library and originates from 1679. In 1727, the hall was renovated and the frescoes were added by painter Siard Nosecky.

The scenes on the ceiling are based on the hall's founding ideas that true wisdom is acquired through fear of God. In fact, there is a legend above the iron gates in the hall that declares, "INTIUM SAPIENTIAE TIMOR DOMINI" - the beginning of wisdom is the fear of God.

There are 18,000 volumes in the hall and a number of globes as well. The name of the hall comes from the fact that most of the volumes pertain to the Bible in some way. 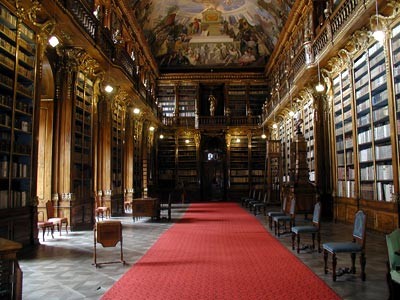 This hall was completed in 1797. The beautiful walnut interior was transported from another monastery and adapted to fit the hall.

The highest row of books is only accessible from a hidden staircase. Of course, it's hidden behind a set offalse book spines.

The fresco is called Intellectual Progress of Mankind and depicts science and religion as they have evolved over centuries.

The library boasts a number of famous past visitors, including Napoleon Bonaparte's wife, Marie Louise. She was so impressed by the library that she sent it a four volume work on the first Louvre Museum. 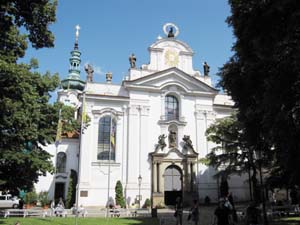 The Basilica of the Assumption of Our Lady has a long and varied history, including many renovations because of fires and bombardments.

Mozart is said to have improvised on the organ here in 1787.

The church has vaulted ceilings, 10 side altars and a cycle of frescoes with motives of the Blessed Virgin Mary.

Sadly you can only peek into the church when no services are being held. Attend a service to get a glimpse of this wonderful church. Services are 18:00 everyday and on Sunday at 10:00. 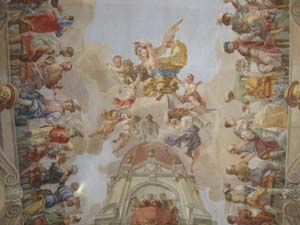 You can visit two floors of the monastery. The ground floor includes the Romanesque halls and the Winter and Summer Refectories. These were large halls for communal meals.

The Summer Refectory is particularly impressive with a stunning fresco that spans the length of the great vaulted ceiling - seen here.

The Picture Gallery is on the second floor. The monastery houses a vast permanent collection of paintings and scultpures. Although the gallery displays just a small portion of those in rotating exhibitions.

Founded in 1143 - it's one of the oldest Premonstratensian orders in the world.

The monastery, like many buildings in Prague, was subject to fire and eventually renovated in 1258.

In 1420, the monastery temporarily shut down due to the war with the Hussites.

The monastery was plundered by war and in decline until the 16th century.

In 1679 the Theological Hall of the library was completed.

In 1797 the Philosophical Hall of the library was completed.

In the 1950s monastic orders and congregations were forbidden by Communist rule. Strahov monastery was essentially dismembered and left idle.

After 1989, the monastery's buildings and property were returned.

Just across the square from the monastery is Strahov Monastery Brewery. The brewery dates from the 14th century and it has a restaurant as well. And, the prices are surprisingly affordable. 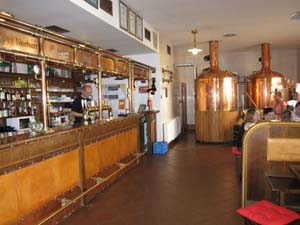 Of course, just below the monastery you'll find great views of Prague. We also recommend taking a stroll through Petřín hill and climbing the little 'Eiffel Tower.'

There too, you'll find a House of Mirrors,Štefanik Observatory and a glorious rose garden. Combine the monastery with Petřín and Prague Castle for a full day of great Prague sights.

Back from Strahov Monastery to Prague Attractions

Back to My Prague Sights homepage