Brevnov Abbey, also known as Břevnovský Klášter, is a working abbey. For us, it brings to mind a combination of some fantastic things. 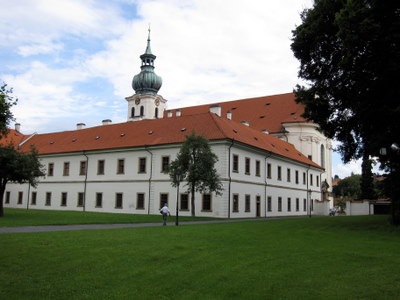 Not only is the abbey a local setting away from the tourist crowds, but it also includes significant history, places to get lost and even a recommended Czech restaurant with good food and drink.

We actually like to come here with the kids to roam the orchard, feed the ducks and see the frescoes inside the basilica. Well, a concert from time to time will bring us here too! 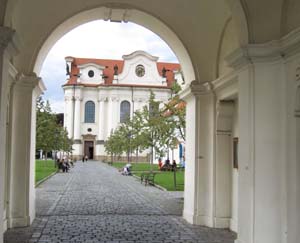 Brevnov Abbey is just outside of Prague's historical center. But, it's easy to get to -  just a few stops on tram 22 past Prague Castle.

Brevnov Abbey was founded in 993 which makes it the oldest Benedictine monastery in the country. Much of what you see today though is from the 18th century.

Through the centuries, like many Prague attractions, it took its share of hits from general decay, war and different governments.

But thankfully, the abbey has slowly been restored to its early vision.

The main jewel of Brevnov abbey is the impressive St. Margaret's Basilica. This Prague church like St. Nicholas' was built by Kristof Dientzenhofer in classic baroque style in the early 18th century.

It's a daunting sight even from the tram stop as it stands out amongst the greenery of the abbey. Inside are incredible trompe l'oeil frescoes on the vaulted ceiling and a robust organ in the balcony.

Since this is part of a fully functioning abbey, you'll need to visit during a church service to see inside. But don't let that deter you. We'd suggest visiting just to peek inside through the locked doors and to ramble around the abbey's grounds.

The other buildings of the abbey are only viewed by arranged tour. There's a Romanesque crypt, more frescoes and Theresa Hall where concerts are occasionally performed. Check the placard near the main entrance to the abbey for more info. 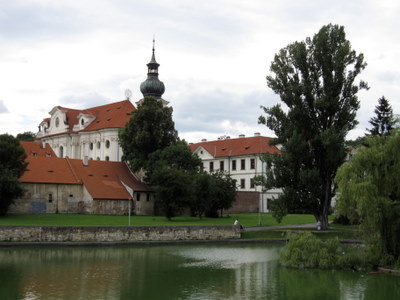 The area outside the walls of the abbey include beautiful willow trees, a few small fields and two small ponds fed from a spring. Feel free to hang out and feed the ducks and carp or stroll through the grounds.

Behind the walls of the monastery, you'll find  a few paths, a large orchard and various spots to sit in the grass. The orchard is behind the basilica and takes a little extra effort to find, but it's a very nice walk.

Aside from the greenery around, there are a few ruins that are just kind of cool. Old chapels and buildings give the area a sense of history that's not seen nowadays in Prague.

Looking for accommodation with character? Well the Adalbert Hotel is exactly that.

It sits just across from St. Margaret's Basilica and has simple, elegant taste. Most visitors don't even realize there's a hotel here - that's how understated it is.

In fact, we've often thought it would be nice to treat ourselves with a stay here. It's completely hidden from the outside world and has a retreat-like character about it.

There's a wonderful Czech restaurant at the abbey. It's the kind of place that will surprise you and reward you for making the trip out here.

They serve fresh, tasty Czech food, but not ordinary pub grub. This is good stuff with a decent choice beer and wine. It's a casual place so the family is welcome too.

We particularly like the outdoor seating when the weather is good. Come for just a beer or even soup served in bread. Yummy! 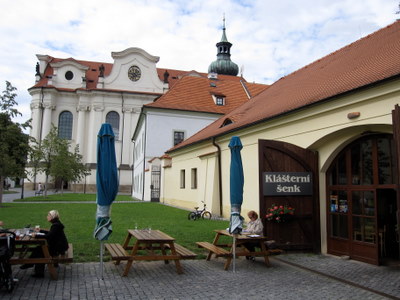 Attending a church service doesn't require any particular faith or commitment, so please come by for a service if you have a chance. Just to sit in the pews and hear the organ is a wonderful experience.

And, there's a children's mass on the first Sunday of every month.

Where is Brevnov Abbey?

Well, the abbey is in Břevnov, where else!

Břevnov is a small district of Prague just past the castle district of Hradčany.  It's easy to find via tram 22 or 25. The tram stop is Břevnovský Klášter.

You'll see the abbey from the tram stop - just cross one street and you're there.

When you head back to the tram, you might consider stopping at the classic beer garden U Kastanu. Grab a beer and relax on one of many wooden tables. (See map.)

This pub is famous for being the place where the Communism party of Czechoslovakia was founded. Whew, what were they drinking?!