The Beautiful and Free Wallenstein Garden

Wallenstein Garden is in the middle of a beautiful Baroque complex, hidden behind a variety of buildings in Malá Strana. 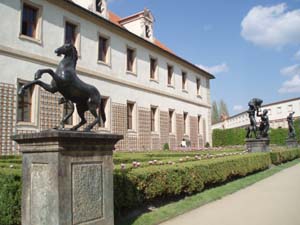 Built in 1630, the garden is a lovely collection of sights ranging from fountains and Greek myth inspired statues to an owl's perch and a few roaming peacocks.

We particularly enjoy visiting with a book because the sprawling garden makes for an ideal place to sit read. So, bring your guidebook while returning from Prague Castle for a break from sightseeing.

You will find a few tourists here but not nearly the crowds you see elsewhere. It seems that most people find the garden by accident. That's because it's hidden behind an enormous wall and accessible only through three unassuming doors.

Where is Wallenstein Garden? 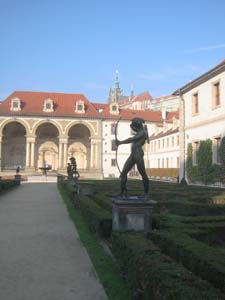 Wallenstein Garden is in Mala Strana, across the river from Old Town. It's very close to Manusuv Bridge. More specifically, it's just behind the Malostranská metro station.

By metro... take the A (green) line to metro station Malostranská. Go up all the escalators and at the top turn left. Right when you get outside turn right. There will be a gate and then a little door to the garden.

From the castle... enter the courtyard of Wallenstein Palace, home to the Czech Senate at Valdštejnské náměstí 17.

Then walk across the courtyard to the entrance to the garden. Along the way you'll see an interesting old well pump on the right wall. It still works.

The most convenient entrance is the one just behind Malostranská metro station. Exit the station to your left after coming up the escalators and then turn immediately to your right.

The other entrance is located about half way down on Letenská street. In the large wall to the garden, there's a small door to this busy tram street. 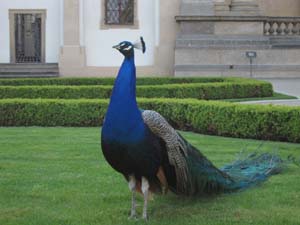 At one end is the Wallenstein Palace which houses the Czech Senate. The palace has a remarkable loggia with painted ceiling and on occasion you can catch a free concert performed here - usually in the summer to autumn.

At the other end of the garden you'll find the Wallenstein Riding School. The school is actually part of the National Gallery in Prague and has ongoing exhibitions.

Like many hidden Prague sights, there's something a bit bizarre here (or very interesting depending on your point of view).

The enormous stalactite gray wall of the garden is just very different. To me, this mammoth wall looks like part of a drip-dried mud castle of sorts. It has hidden creatures worked into the stone that peer out from different places which children love to search and find.

Also, check out the large owl refuge next to the wall. The wise looking fellows sit perched high in their cages while outside peacocks roam freely pecking at the the lawns.

Next to the Wallenstein Riding School is a fish pond with fountain and statue in the middle. Feel free to bring some bread for the ducks and fish.

The various statues in the park depict Greek mythological scenes and characters. Unfortunately, the originals were taken away by Swedes during Thirty Years War.

The one drawback about visiting the garden is that it's only open from April 1st through October 31st. This is actually common for other gardens in Prague as well.

Oh, and you can't lounge or walk on the grass. That's for the peacocks only! But entrance is free, so come and go as much as you want.

We really like to visit the garden in the evening - especially when the sky is clear. There's a nice glimpse of Prague Castle from here and the warm colors of the buildings seem to come alive. Of course, there are far less tourists at this time as well.