Vojanovy Sady is popular with locals for many reasons. It's relaxing, peaceful and a hidden gem. And, best of all, most tourists never stop here.

They literally walk right by with their heads pointing toward Charles Bridge.

But this is great news for us!

I love it here. Seriously, it's one of my favorite places in Prague.

And, it's right in the city center. It makes me feel like there is a secret portal that most people can't find.

Maybe me and a select few people have superhero powers -- maybe only we can see this garden. Yes! That's it, right....? 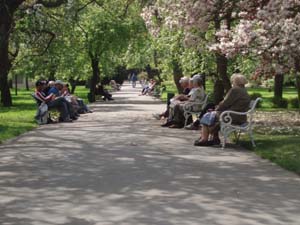 Other than the arched entrance to the park, the whole place is enclosed and removed from the outside world.

A large wall borders the park on one side. And, backsides of buildings (inaccessible to the public) surround the park on the other side.

But, what's even more intriguing is how such a calm and pleasant place exists within a stone's throw of Charles Bridge.

Vojanovy Sady is probably more popular for what's not here. No traffic. No big tour groups. No glaring tourism. No anything for that matter.

But there are trees. Lovely old benches. And, there are lots of unique little details that might surprise you.

In the back of the garden you will find a bubbling fountain and a few peacocks nesting in the vines.

This park is actually the oldest one in Prague and dates to 1248 when it was first used as an orchard. 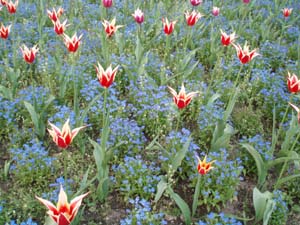 One of the more interesting and slightly perplexing parts of the entire park is a ruin that was once the Chapel of St. Elias.

According to a sign, this chapel was built in the 17th century "in the form of a stalactite cave." But, now it looks more like a eerie dungeon. How inviting!

Today the park also includes a small children's playground, tiny pond shaded by a brilliant willow tree and even a WC.

To give you a feel of the serenity of this place, watch this short spring inspired video. There's nothing like spring sunshine and time at a park in Prague.

And, a couple of summers ago we originally posted about the park with this video.

The park is sandwiched behind a big wall in Malá Strana. It's basically between the Malostranská metro station and the west end of Charles Bridge.

If you're in the mood for gardens and green places like this, then we suggest you combine a visit here with nearby Wallenstein Garden and even Kampa Island.

And, if you're really in the mood for more offbeat stuff, walk from Vojanovy Sady to Kampa and then up to Petrin for a look at the Prague's incredible Hunger Wall.

This side of Prague, known often as Lesser Town, is much greener than that of Old Town. You'll find many more places to quietly step back from the city in this quarter as well as far fewer tourists.

Have your say about what you just read! Leave us a comment in the box below.