New World Street (Nový Svět) is actually an old and romantic place. So throw out any ideas you might have had about a modern boulevard in Prague.

This hidden sight is more of a short lane tucked away from the tourist crowds - but still very close to the castle.

At one end of the street is a mammoth fortification wall - built with thousands of bricks (very impressive).

And, at the other end is a little street that leads to the castle.

It's the stuff in between that makes this place so unique and romantic.

The street is cobbled. It's winding.

It's like a quiet village road that didn't get the memo that Prague is now a bustling capital. 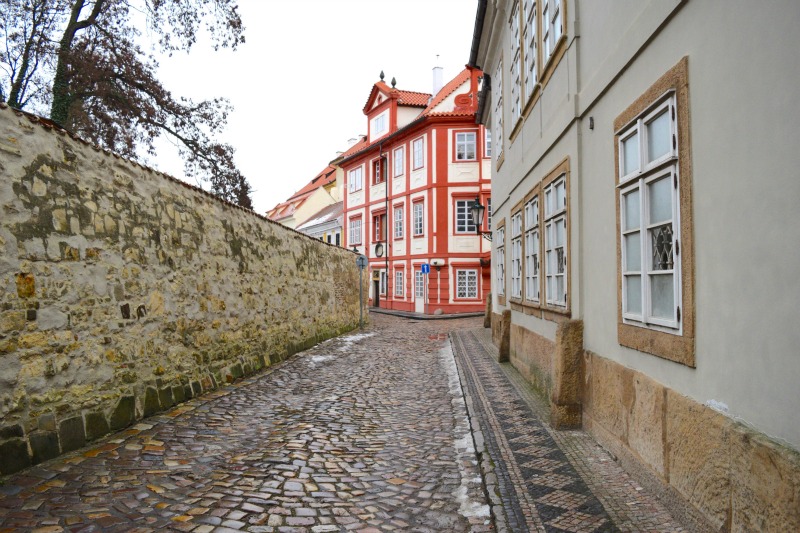 Where are all the tourists?

New World Street was originally founded in 1320 and was considered to be outside the city of Hradčany with the castle at its center. The name came from the fact that it was newly inhabited - a little like a suburb ;-)

The area was burned in 1420 during the Hussite War and then again during the great fire of 1541 that included much of Malá Strana and Prague Castle.

The astronomers Johannes Kepler and Tycho Brahe are said to have spent time at the House at the Golden Leg - which is number 76-1 today. They collaborated during a vibrant science and art period under Rudolf II, around 1600.

All alone, and better for it

Like many of our hidden Prague sights, you won't find a lot of tourists here.

This is a small quiet street making it a great place to stroll and admire the buildings. No cheap souvenir shops, cars or anything for that matter - thank goodness.

But there is a delightful little cafe here. It's a super local place run by friendly folks. Highly recommended. 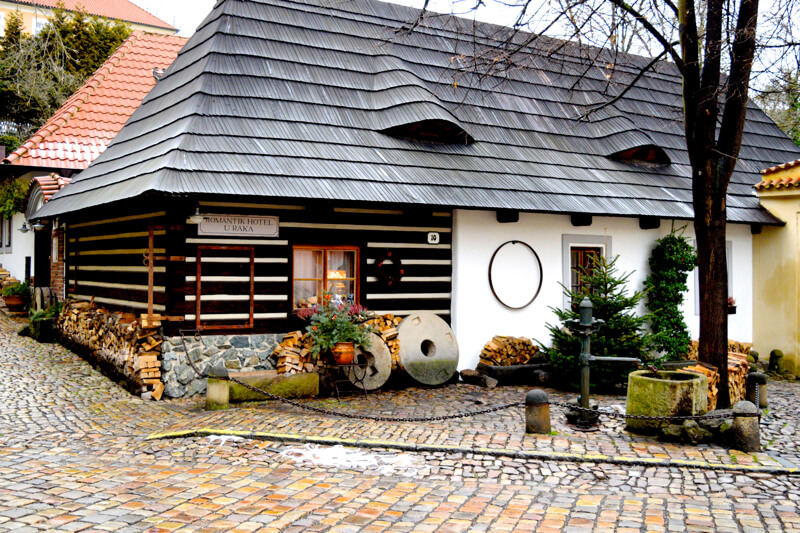 So, where is this street anyway?

Visiting this street is extra cool, because you can combine it with other interesting destinations.

Connect it to your castle visit. Or, add it to the time you spend getting to other sights like Loreta, Petřín or even Černín Palace and its garden. (This huge 18th century building was once the headquarters for the SS.)

The map below is an overhead view of New World Street (marked in blue). You can see the edge of Prague Castle on the right side. 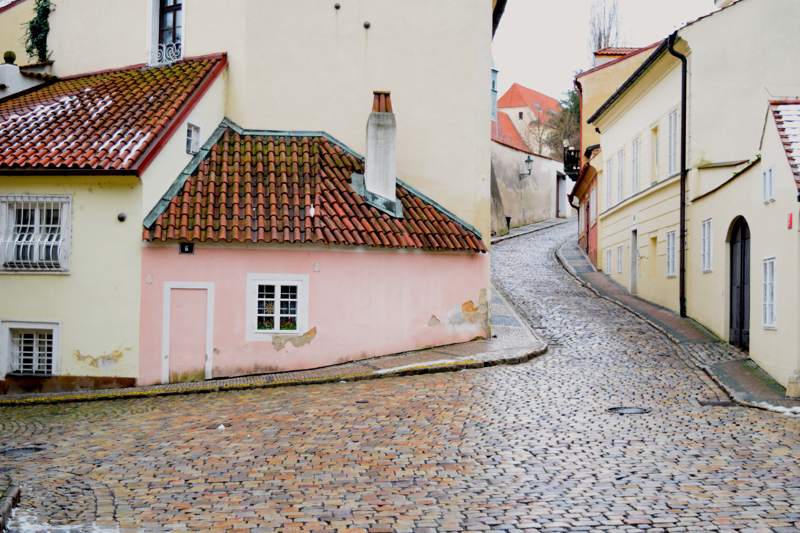 We like to take the 22 or 23 tram up to the stop Pohořelec and then walk to New World Street.

Get off the tram and cross the street going into the arched hallway. Follow the sidewalk for about 100 metres. Just after the parking lot, turn to the left. Above you on the left will be the impressive Černín Palace. Keep going down the hill and the Church of Our Lady of Loreto will be on your right.

From here, the street is very close. Turn to the left after the church. And, follow this street down the hill. At the bottom of the hill is New World Street going to your right. You can't miss it.

Before you turn, peek at the lovely Romantik U Raka Hotel (seen above). It's a charming and romantic hotel with rustic charm. 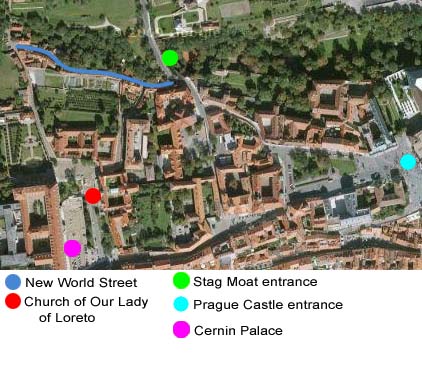 When to Visit New World Street?

This is a public street so it's always open. But, if you visit Prague during the months of April to October, you can combine your walk here with a visit to the castle's Stag Moat.

The Stag Moat (Jelení Příkop) offers a natural, almost hidden entrance to the castle. Turn left at the eastern end of New World Street and cross the street. A few metres down on the right is the secluded gate.

Take the steps down and follow the pathway all the way to the castle. Or, from here you can access all kinds of other paths and sights. Or, just keep walking straight through the tunnel and all the way down to Malostranská metro station. It's a wonderful walk.